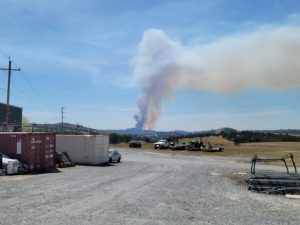 Campo Seco, CA — Officials have gained 100-percent containment on the first major vegetation of the year in the CAL Fire Tuolumne-Calaveras Unit.

The Campo Fire ignited on April 29 in the 5100 block of Buckboard Lane in the Campo Seco area of Calaveras County. It was earlier determined to be caused by an escaped debris burn. The fire forced the Calaveras County Sheriff’s Office to initially issue an evacuation order for communities near the fire.

CAL Fire reports that the blaze is now fully contained at 160 acres. Crews were on the scene overnight patrolling the area and looking for any hotspots within the containment lines.