Woman And Two Juveniles Involved In Rollover Crash On HWY 108 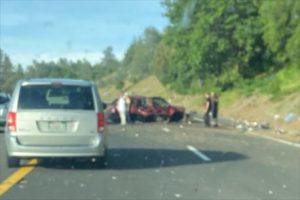 Crash on Highway 108 between Soulsbyville and Twain Harte

One person was flown from the wreck that occurred just after 6 p.m. between Soulsbyville and Twain Harte, in the eastbound lane and stalled traffic for about an hour, earlier reported here. CHP spokesperson Steve Machado reports three people, including two juveniles, were inside the 2002 GMC Envoy SUV that rolled over. Machado detailed that 25-year-old Savannah Lynn Taylor of Twain Harte allowed the SUV to drift off the roadway and smash into an embankment. The impact caused the vehicle to overturn, and it landed on its wheels in the eastbound lanes.

All three suffered minor injuries, but Taylor’s required her to be flown to a Modesto hospital for treatment while the juveniles were taken by ground ambulance to Adventist Health Sonora.

Machado added that they all had their seatbelts on and noting that alcohol or drugs were not suspected to be a factor in the crash.