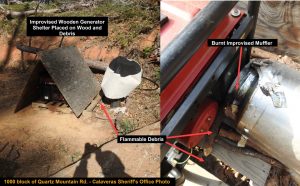 Calaveras County, CA – Two separate illegal grows in Calaveras County worth nearly $1.5 million in pot were raided on the same day last month – one contained dangerous equipment that could have ignited a wildfire.

On April 22nd, Calaveras County Sheriff’s Office Marijuana Team first hit a property in the 1000 block of Quartz Mountain Road in West Point. After seizing 612 growing marijuana plants worth an estimated $259,000 value and over 5 grams of methamphetamine, deputies found a disturbing sight. Tucked under a wooden generator shelter, as pictured in the image box, they discovered an improvised muffler attached to the generator with visible burn marks surrounded by dry leaves and sticks. One suspect was handcuffed at the scene, but another escaped by fleeing on foot.  Arrested was 63-year-old Phuc Thine Duong of Sacramento.

A couple of hours later in the 13000 block of South Camanche Parkway in Burson, another 1,703 growing marijuana plants with an estimated value exceeding $1,192,000 were found in a search. Two arrests were made: Thai Phong Dao, 34, and Quoc Vinh Lao, 46, both of Elk Grove.

Anyone with knowledge of illegal marijuana operations is asked to call the Sheriff’s Office Anonymous Marijuana Tip Line at (209) 754-6870.