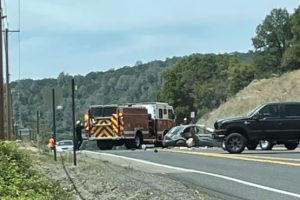 Update at 1:50 p.m.: The CHP reports Mono Way has reopened to traffic after a solo vehicle crash near Hess Avenue in East Sonora. A car rolled over several times and landed on its wheels at the Edgemont Acres Road intersection halting traffic on Mono Way. Officers directed one-way traffic for just over a half-hour as a tow crew removed the wreckage. The CHP is luckily reporting minor injuries in this crash.

Original post at 1:34 p.m.: East Sonora, CA — First responders are on the scene of a solo vehicle crash on Mono Way at the Edgemont Acres Road intersection near Hess Avenue in East Sonora that has slowed traffic in both directions.

The CHP reports that a car rolled over several times and came to rest on its wheels. The wreckage, close to the Indian Rock Center, is partially blocking the roadway. Officers are directing one-way traffic, which is getting backed up. They ask motorists to avoid the area if possible. There is no word on injuries at this time. An update will be provided as soon as new information comes into the newsroom.