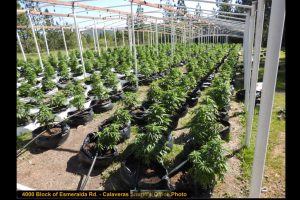 The first raid by the Calaveras County Marijuana Team Recap took place on April 8th at a property in the 10800 block of Milton Road in Jenny Lind. Deputies seized 1,246 growing marijuana plants and over 53 pounds of processed marijuana worth a combined estimated value of $909,300. The marijuana plants were being cultivated in four large “hoop house” structures.

A week later, on April 15, the team search a Murphys’ property in the 4000 block of Esmeralda Road. This is the fifth time they have served a search warrant at this site since 2017. No suspects were at the scene during the raid but 810 growing marijuana plants with an estimated value exceeding $567,000 were confiscated. Sheriff’s officials report that evidence was collected at the scene and the investigation is ongoing.

Anyone with knowledge of illegal marijuana operations is asked to report to the Sheriff’s Office Anonymous Marijuana Tip Line at (209) 754-6870.