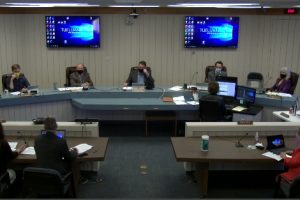 Sonora, CA —Tuolumne County supervisors discussed the possibility of charging an annual business fee to unincorporated areas of the county and concluded that more research and study needs to be done before a final decision could be reached. The original story about the proposed fee can be found here. It would be a $32 annual fee.

At today’s meeting, Supervisor Kathleen Haff was concerned about the impact this additional fee would have on agriculture, which according to her is already overtaxed and regulated. She noted that it doesn’t need an additional fee of any kind while stating those business types “should be excluded.”

Supervisor Jaron Brandon suggested the fee could be collected bi-yearly, making it half as expensive. Additionally, he recommended implementing a test for businesses arguing they would be financially burdened by this fee and giving them the option to pay a lesser amount.

Discussions were also had about the penalty for non-compliant business, one notion was charging double the yearly fee with increased fines for any business that fails to pay moving forward. The estimated money this license would bring to the county is around $80,000 and would be solely used to recoup the costs for running the program.

Further discussions regarding implementing and the details of this license and who would pay or not pay will continue at a future meeting.