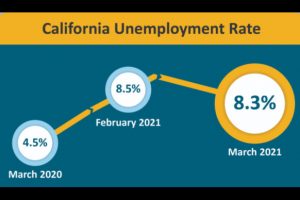 Sacramento, CA — California saw a second straight month of growth following a rollercoaster of a year due to the unpredictable coronavirus pandemic.

The unemployment rate in the state dropped from 8.5% in February to 8.3% in March, according to the report out Friday by the state’s Employment Development Department.

Governor Gavin Newsom had this reaction to the numbers, “California’s economic recovery depends on bringing back the businesses and jobs we’ve lost over the past year. That’s why today’s jobs report, which showed that California added 119,600 jobs in March, is so encouraging – especially following February’s report showing an additional 156,100 new jobs created, which was 41 percent of all new jobs created nationwide.”

All but one of California’s 11 industry sectors gained jobs last month. Restaurants and hotels accounted for more than half of the 260,600 jobs added in the state since February. Experts said Friday that is a sign the world’s fifth-largest economy is exiting the pandemic-induced recession and entering what is likely to be a prolonged recovery.

The only industry sector to suffer a month-over job loss at 600 was financial activities, mainly due to declines in finance and insurance.

Newsom noted, “We still have a long way to go, but with over 24 million shots in arms and more kids getting back into classrooms every day, this is the steady progress that we need to bring California roaring back.”

Currently, signs point to the state continuing to add new jobs in the months ahead as new unemployment claims, both for traditional employees and independent contractors, are at their lowest levels since the pandemic began more than a year ago.

The March numbers were based on surveys during the week of March 12, which was before relief payments and other aid for small businesses were paid out.