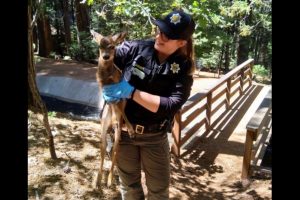 Sonora, CA – Animal services workers take on many tasks, like nursing sick animals back to health, advising the public on wildlife interaction, and, unfortunately, uncovering some horrific abuses of animals.

That was the case just this past Friday, when a man was arrested in Northern California near Lake Tahoe after 16 dogs were found living inside his SUV, a picture is in the image box. A report of a suspicious vehicle sent law enforcement to Bridal Veil Falls, a rural area near Lake Tahoe to investigate. A search of the vehicle revealed that three of the dogs were dead and the rest were tied together, sitting and lying in their own waste. Some of the dogs rescued were a golden retriever, a husky, a dalmatian, and a Pomeranian.

The pooches that survived were placed in the care of Animal Services while a 57-year-old man was arrested on suspicion of non-care and cruelty to animals and placed on $50,000 bail.

Animal control officers also deal with wildlife and currently it is the peak time for deer herds to give birth to fawns, but do not trying to interact with those babies, advise officers – even if one appears to be abandoned. That is because they add adult female deer often stash their fawns in tall grass or brush for many hours while they are out foraging for food.

“It’s actually a survival strategy for the doe to separate from her fawns so as not to attract predators to the whereabouts of her young,” details Joe Croteau, environmental program manager with California Department of Fish and Wildlife’s (CDFW) Northern Region.

Croteau warns that each year, CDFW and wildlife rehabilitation facilities are called to assist with fawns that have been removed from the wild by concerned people. Unfortunately, he added that with limited long-term placement options, such as zoos or other wildlife sanctuaries, the animals often must be euthanized, as they lack the survival skills to be released back into the wild and can become dangerous and difficult to keep as they become bigger.

The public is asked to report an injured, sick, or suspected orphaned fawn, to their local CDFW regional office directly. Also, anyone removing a young animal from the wild must notify CDFW or take the animal to a permitted wildlife rehabilitator within 48 hours. State wildlife officials instruct that it is illegal to feed deer and keep deer in your personal possession. Those crimes are punishable by up to a $1,000 fine and/or six months in jail. A CDFW video in the image box details the dangers and consequences of feeding deer.

To honor all workers that aid animals this week, April 11-17th,  has been designated National Animal Care and Control Appreciation Week. As stated by the Tuolumne County Animal Control on social media its officers are “devoted to all animals: small, exotic, wild and large. We are the voices for those who cannot speak for themselves.” Pictures of just some of the care that the Tuolumne County Animal Control has provided in the image box.