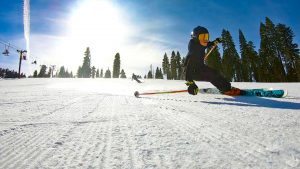 Spokesperson Jeff Hauff reports that the resort received over 223 inches of snowfall this season, or just under 20 feet. The season kicked off on December 21 after a big storm system arrived ahead of the Christmas holiday. Things really kicked into gear during the last week of January when nine feet of new snow fell between the 24-29. Additional snow fell in February and March, with cooler than average temperatures.

Hauff says there was an uptick this year in new guests from the Bay Area and Central Valley as many ventured out in search of skiing and riding in the Sierra Nevada. This year also saw new COVID-19 protocols put in place.

Dodge Ridge is now transitioning to the spring and summer camping season. It will work to open up its 12 campgrounds located in and around Pinecrest. There is a target opening date of April 17 for Fraser Flat Campground and multiple loops of Pinecrest Campground for first-come, first-served, camping. That is a week ahead of the California fishing season which is set to begin April 24.