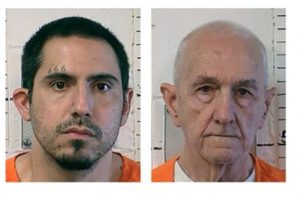 Sacramento, CA – The Amador County District Attorney disclosed he will not seek the death penalty against the already convicted murderer accused of slaying the “I-5 Strangler.”

D.A. Todd Riebe on Wednesday reported filing first-degree murder charges against 40-year-old Jason Budrow while stating he will seek a sentence of life in prison without the possibility of parole. On Feb. 28th, the body of Roger Reece Kibbe, the notorious California serial killer, was found in their shared cell at Mule Creek State Prison in Ione. Budrow is already serving life without parole for the 2011 murder of his Riverside County girlfriend.

The serial killer, 81-year-old Kibbe, was originally convicted in 1991 of strangling a 17-year-old runaway from Seattle and dumping her body west of South Lake Tahoe below Echo Summit in September 1987. Then in 2009, due to new developments in DNA evidence, Kibbe was linked to six other murders in Northern California counties. He then pleaded guilty to those killings in exchange for prosecutors not seeking the death penalty. Budrow reportedly admitted to killing Kibbe on the same day they became cellmates, initially so he would “have a cell to himself,” but then stated it was to avenging Kibbe’s youngest victim.