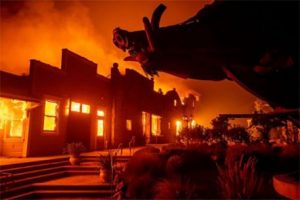 The utility has denied that it committed any crimes even though it has accepted that its transmission line sparked the October Kincade Fire, north of San Francisco, that took 15 days to contain. The blaze destroyed 374 buildings and caused nearly 100,000 people to flee as it scorched 120 square miles.

The lawsuit claims the utility failed to maintain its facilities in the five felony and 28 misdemeanor counts leveled by the Sonoma County district attorney. Those charges include recklessly causing a fire that seriously injured six firefighters, one who suffered second-and third-degree burns to his legs and torso. The company is also accused of destroying inhabited structures and emitting air contaminants “with reckless disregard for the risk of great bodily injury'” from toxic smoke and ash, thereby endangering public health.

Although not having seen the report or state’s evidence, in a statement issued by PG&E, it accepts the findings “in the spirit of working to do what’s right for the victims. However, we do not believe there was any crime here,” relayed to the company. “We remain committed to making it right for all those impacted and working to further reduce wildfire risk on our system.”

These charges are the latest in a series of similar problems for the utility, serving more than 16 million people across Northern California. These latest allegations have the U.S. District Judge for the region, considering orders forcing PG&E to do more Public Safety Power Shutoffs (PSPS) during dry and windy conditions even more frequently than it has in recent years.