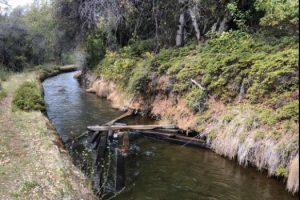 Murphys, CA – Vandals caused thousands of dollars in damage to a Calaveras County water authority’s supply system and now the public’s help is being sought to catch the suspects.

The crime occurred sometime during the weekend of Saturday, March 6th at the Utica Water and Power Authority’s (Utica) public water supply system east of Forest Meadows near the end of Pennsylvania Gulch Road in the Murphys area. Authority officials note that this is the only water supply for more than 10,000 residential, commercial and agricultural customers between Murphys and Angels Camp.

Utica officials say two or more individuals committed felony vandalism after they bypassed a locked gate with “No Trespassing” signs to get to a wooden flume on the North Fork Stanislaus River. While there the vandals threw some lumber that was piled on a wooden platform for flume repairs down the steep, rocky canyon wall. Other planks were tossed into the flume creating several “log jams” but luckily not causing the water to overflow the canal banks. Utica officials estimated the cost of the materials that were damaged or destroyed along with staff time to clean up the mess upwards of several thousand dollars.

Currently, video surveillance and photos along with tire tracks, footprints, and other evidence left at the scene area are being reviewed by the Calaveras County Sheriff’s Office. Utica officials add that foot patrols have been increased on the system and additional security cameras have been installed since the crime, allowing Utica to immediately notify sheriff’s officials if needed. They ask that if anyone saw any suspicious activity near the flume and ditch system to please call detectives at (209) 754-6500, or the anonymous tip line at (209) 754-6030. Information can also be given directly to Utica at joelm@uticawater.com or (209) 736-9419.