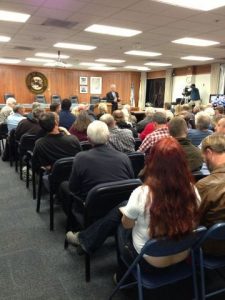 Sonora, CA — Plenty of people came out to a Town Hall meeting in Sonora and gave their opinions on current issues facing the country and the county. Mother Lode Republican Congressman Tom McClintock hosted the meeting in the Tuolumne County Board of Supervisors chambers. The Rim Fire took center stage with constituents wanting to know what the Congressman was doing to help the county, especially in terms of the reality of harvesting the burnt timber.

McClintock says, “I’ll know more in a couple of weeks. I am quite confident that my measure to expedite the salvage of the fire killed timber will pass the House. We are in desperate need of leadership from Senators Feinstein and Boxer to assure that the measure can get through the senate and be signed by the President. We are working, particularly with Senator Feinstein’s office to see if accommodation is possible.”

Another hot topic was the government shutdown. McClintock took some heat from the crowd. One man complained about the big hit his tourism based business took with the combined double whammy of the Rim Fire and the shutdown. Another man criticized Republicans for “acting like spoiled brats”.

McClintock countered, “I cannot think of anything more we could have done to avert a shutdown. We are now watching the destruction of what was once the finest healthcare system in the world, due to Obamacare.  I hope that they (voters) will at least look back on this fight and realize this is what the Republicans were trying to protect the country from having to go through. We failed, but we tried. I don’t regret that we tried. I regret that we failed.”

McClintock has recently been very critical of the federal Affordable Care Act calling it a “train wreck”. McClintock’s Congressional District Four covers much of the Sierra Nevada region and Yosemite National Park.