Mobile Home Park May Be Forced To Close 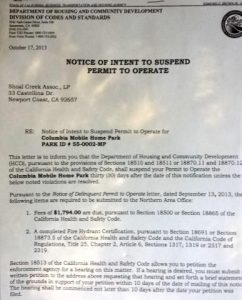 Columbia, CA — A local Mobile Home Park has been issued a 30 day notice that its permit to operate will be suspended.

The owner of the Columbia Mobile Home Park is Jim Clayton. The posting was put up today at the park on 22217 Parrotts Ferry Road by the California Department of Housing and Community Development.

The notice states two violations, an unpaid fee of $1,794, and Fire Hydrant Certification are the reason for the suspension. Unless the fee and the certification violations are resolved the public notice says Clayton’s Permit to Operate will be suspended. It also states that when the Permit is suspended it will be unlawful to collect rent or other monies from the residents occupying the mobile home park.

The notice informs the owner he can file a petition for a hearing on the matter. The notice sites several California Health and Safety Code Regulations as reason for its actions. It also states that if the matter is not resolved the Franchise Tax Board and the Internal Revenue Service will be notified that Columbia Mobile Home Park is no longer operating as a legitimate business.

Back in May 2013 the park was given a two week notice that it could have its taps and sewer shut off due to a past due bill of $17,884.35. The issue was resolved within 24 hours for that story click here.

There are 63 spaces in the park, some are for RVs, and others are for houses and apartments. According to Robin Sumerlin who works and lives at the trailer park approximately 13 spaces were vacant back in May.

For a map of the Columbia Moblie Home Park off of Parrotts Ferry click here.