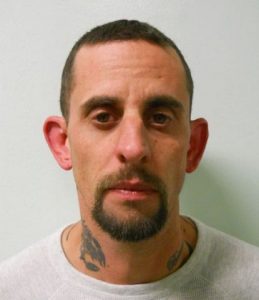 Sonora, CA — The Sonora Police Department spotted a man on Barretta Street that had two outstanding warrants for his arrest.

The PD reports that an officer was able to identify 36-year-old Brian Bockert by his neck tattoo. He was wanted for the transportation and possession of controlled substances and narcotics. The officer quickly placed Bockert under arrest. In Bockert’s possession was six grams of methamphetamine, 3.5 grams of psilocybin mushrooms, several methadone pills, over a gram of heroin and marijuana, and a record of his sales and transactions of these types of substances.
Bockert was booked into Tuolumne County Jail and he now faces several new charges.