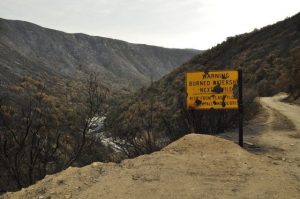 Sonora, CA — Tuolumne County will ask the Feds for money to offset agricultural losses during the Rim Fire. The Tuolumne County Board of Supervisors voted to send a letter requesting aid from several programs available through the U.S. Department of Agriculture. One program involves the Catastrophic Fire Recovery EQIP initiative which will help agricultural producers and those that have private timber land. It can give up to 75% in reimbursements and eligibility is approved at the local level.

The letter will also refer to four other programs through the USDA’s Farm Services Agency. Those deal with farmers, livestock and equipment. Tracie Riggs of the Tuolumne County Office of Emergency Services says the Livestock Forage Disaster Program deals with federal land.

Riggs says, “We have a lot of individuals who have their livestock out grazing on these federal lands. They have lost fencing and irrigation systems. This program could help.”

There is one problem with those plans, all were funded under the 2008 Farm Bill and expired in 2011. The letter will ask the USDA to refund those programs for farmers hurt in the Rim Fire.

Supervisor Sherri Brennan recused herself from the vote citing a conflict of interest as her family business is in cattle ranching.

Ckick here for the information on the plans.