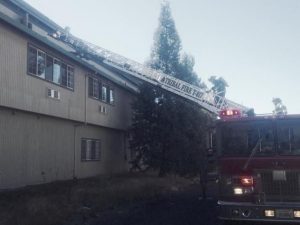 Twain Harte, CA — Firefighters are on the scene of a structure fire in Twain Harte. Initial reports were that the flames started in a bathroom and had been put out by workers. However, Cal Fire now reports they are checking the ceiling of the commercial building at this time. The business is located at 18000 block of Tiffeni Drive in Twain Harte. They say all workers are out of the building.

Update 3:15 pm: All Cal Fire crews have been called off the fire except for one Twain Harte Fire District engine.

Update 4:31pm: Twain Harte Fire District Captain Neil Gamez says the fire is out. He says it was contained to the bathroom and caused by a faulty fan. A check of the ceiling area found no further damage.