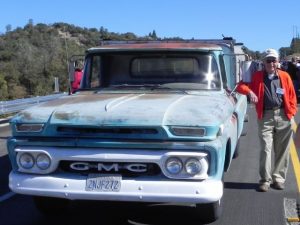 Sonora, CA – Tuolumne County motorists can start driving on the new section of the East Sonora Bypass today. A ribbon cutting ceremony was held at 1:00pm today and the road is scheduled to be open to the public to drive at 3:00pm. The CHP noted that the speed limit on the bypass is 55 miles per hour.

The first person to officially drive across the bypass was Sonora City Councilmember Ron Stearn. Stearn was recognized for his 49 years of City Council service. Accolades were given to the Project Managers and all the members that helped complete the project, including the public for investing $54 million in state and local funds. Caltrans and the Tuolumne County Transportation Council (TCTC) finished the project eight months sooner than expected.

Tuolumne County Transportation Council Executive Director Darin Grossi says, “The Standard Peaceful Oak area is a major commercial area with a lot of money ready to be invested in the area with jobs that will build our economy.”

Caltrans Director Malcolm Dougherty says the new section is “going to cut on travel times back and forth but really what is important for me is the safety benefits.” He says, “[We] are really making it a much easier drive and reducing a lot of the conflicts.” He also says, “It’s an important route; important to the Mother Lode and to the Sierras and then the connection down into the central valley.”

The Highway is used by more than 20,000 motorists daily. A dry winter last year combined with efficient management allowed the road to open ahead of schedule. The local community was thanked by project officials for enduring the construction delays during the entire 18 month process. There remains a third phase and an on-off ramp at Standard to complete.