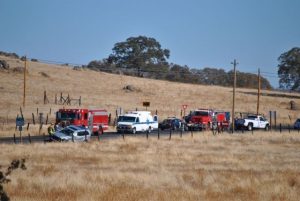 Tuolumne County, CA — There is a two car crash on Highway 49. Emergency crews are heading the scene near Chinese Camp and Highway 120. The CHP reports a Chevy pick-up truck and a MercedesBenz SUV have hit head on. An ambulance is also on its way and there are reports of major injuries. Motorist will want to use caution as there will be plenty of activity in the area.

UPdate 3 pm: The CHP reports the eastbound lane of Highway 49 is blocked and traffic is getting backed up. Also there is about a 40 foot spill of fluid in that lane, but there is no word on what the liquid is at this time. The CHP has called for sand to soak up the spill.

Update 3:15 pm: The CHP reports a detour has been set up around Highway 49.

Update 3:30 pm: Crews are on scene using sand to try to soak up the spill and re-open highway 49.

Thanks to Melody Scott for the photos.