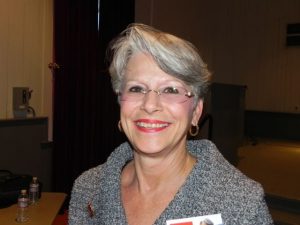 Sonora, CA — A member of the Sonora City Councill will be on National Television tomorrow. The Discovery Investigation Channel show is called “Homicide Hunter”, airing Tuesday at 9pm EST.

The name of the episode is “Run For Your Life” and features Sonora Councilmember Connie Williams being interviewed by retired Detective Joe Kendra. The show details the homicide of her father the night before running the 10 mile 7,815 vertical gain Pikes Peak Marathon in Colorado Springs.

The homicide happened in 1993 before Williams moved to the Mother Lode area from Atlanta Georgia. She says, “It has been 20 years and it was one of those situations you never think will ever happen to you.”

Williams noted, “I didn’t think [doing the show] would bother me, but when I went back to Colorado Springs, to shoot the show with Joe Kendra…I was driving down the highway and I saw Pikes Peak and the snow, it brought it all back to me then and it was very emotional. It was emotional for me to re-live everything that happened that dreadful day.”

Williams does feel that an important factor in the investigation was that people in Colorado Springs felt that they didn’t have a gang problem. Williams says, “We suppress far too much information about what is happening in our community that the public needs to know.” Williams says, “My Dad was a WWII vet and my Dad was a golden glove boxer. My dad never even had the opportunity to lift his his hand to deck this kid because the gun went off immediately and took my Dad down.”

Williams is a supporter of neighborhood watch and says, “People need to be aware of what is going on around them. We need to be the eyes and ears of the police and CHP and report suspicious activity to the authorities.”