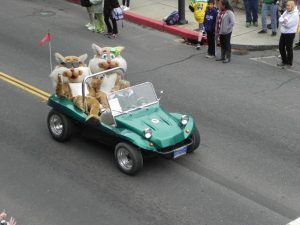 Sonora, CA — Streets in downtown Sonora will be closed this afternoon for the Wildcats Homecoming Parade. They will be playing Weston Ranch. Washington Street will be closed between Snell Street and Church Street from around 2:15 pm to 3:00 pm. School Street will be blocked off from about 1:30 pm to 2:15 pm for staging the floats.

The parade will start on School Street leaving from the high school and head south down Snell Street to Washington Street. Once on south Washington Street the floats will turn right onto Stockton Road, and then right onto South Green Street. The event ends at Courthouse Park. The Golden Regiment Band will perform at the Park after the parade.

Motorists will see “No Parking” signs on Green Street to Stockton Road. Green Street will be closed between Bradford and Yaney Streets during the performance.

Sonora Police report cars will be towed at the owner’s expense. They ask motorists to use alternate routes whenever possible. Police also caution drivers to be patient, as travel will be extremely slow and congested in the downtown area before, during and after the parade.

Click here for a map of the parade area.

You can hear all the gridiron action from tonight’s game on Star 92.7. Also, Summerville will take on Bret Harte tonight and you can listen to the live play-by-play on 93.5 KKBN.