Over 24 Miles Of Rim Fire Damage 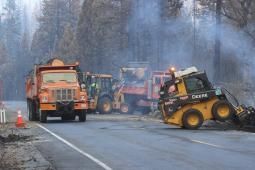 The report represents the worst case view of what it could cost after the winter to repair road and other damage in the burned area of the forest. The report defines six areas and 24.54 miles of area to be addressed. Tuolumne county doesn’t expect the damage will end up being $13,867,937 but listed the cost if a potential 40% of the roadway is destroyed or needs replacing and other treatments.

Replacing to bridges, creek culverts, and roadways in the Hardin Flat area if they are washed out, or there is a landslide, is reported as costing up to $4,421,139 for replacements. In the 8.38 mile designated area of Evergreen the replacement cost is reported at $6,315,491. The 7.15 mile area of Buchanan Road, also including possible bridge replacement, a culvert in the Creek, and if the roadway washes out in a landslide is reported at $2,728,686.

The full Report “Potential Deastation due to RIM Fire” pdf is here.