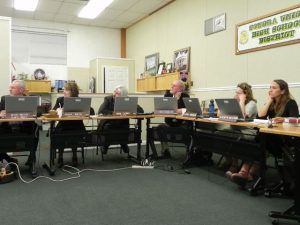 Sonora, CA — Amid accusations of lying and possibly being slapped with a lawsuit, the Sonora Union High School District Board approved a construction phase plan for the $23 million Measure J bond money. There were five plans to choose from and the board voted three to two in favor of the architects preferred plan. It calls for compressed construction which will start on March 31, 2014 and end on December 2, 2016. Most of the nearly three years of construction will be done over the summer months so that no temporary classrooms will be needed. Board Members Rob Lyons and Katryn Weston voted against the plan calling for more time to review the options and receive more clarification.

Former Sonora High Teacher Angela Brown was at the meeting and agrees the board needs more time to consider all the options. She is a staunch critic of the way the Measure J bond was presented to the voters and is even threatening a lawsuit challenging whether the money can be spent on a pool. She says she is angry and feels she was lied to.

“The Board and the Superintendent willfully deceived the voters of Sonora High School District by not putting the aquatic center on the bond. That is why I am upset,” says Brown.

Sonora High School Superintendent Mike McCoy denies the charge. He says the Humanities Building was never specifically mentioned in the bond language either and it is one of the construction projects. He believes there is a lot of misinformation out there and there needs to be more communication with the public.

“If I do my job as a communicator, I think they (voters) will see we have identified the most important projects with a balanced education setting. My number is in the phone book and I am going to take any opportunity to speak about the projects whether it’s at Rotary, Kiwanis, or coffee klatches in my office,” says McCoy.

A meeting has been set up on October 22 with the architect and School Board President, but it is by invitation only. Brown and others at tonight’s meeting argued there should be a public meeting to answer all voters concerns. McCoy plans to set up smaller meetings to address concerns.

Here is an outline of the Preferred Phase Plan the board approved: