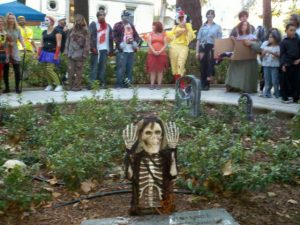 Sonora, CA — Courthouse Park in Sonora is filled with protestors and later this afternoon zombies will take over the streets. First it is the “March Against Monsanto” running until 2pm followed by the 3rd annual “The Walking Dead Sonora” from 4pm-7:30pm.


Then when the clock strikes 4 o’clock some of the protesters will turn into creatures of the night for the third annual “Walking Dead Sonora Zombie Walk”. The goal is to raise food and money for two charities.

March Organizer and zombie Heather Nordstrom says, “We are having a food drive to benefit the ATCAA Food Bank and the Humane Society of Tuolumne County. There are costume contests, a zombie make-up booth, a zombie hand toss game and the Solluna Roma Belly Dance Troupe will be performing Michael Jackson’s “Thriller” in the park.”

All zombies and humans are encouraged to bring food and donations.