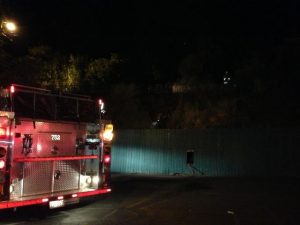 Sonora, CA — The Sonora Fire Department calls three vegetation fires started last night off Stockton Road suspicious. The fires were within a quarter of a mile of each other. Flames broke out around 8 pm behind a fence in the lower Save Mart Shopping Center. Less than an hour later two other fires were started on the other side of the street up in the grass behind the landmark train near the entrance to the Mother Lode Fairgrounds and Southgate Drive.


Sonora Fire Department Chief Mike Barrows says, “We found no source of ignition for all three. No cigarette or burning object so it appears somebody lit those fires intentionally.”

Barrows says the largest of the three fires by the fairgrounds grew to about 40 ft. by 100 ft. He warns it could have been worst if we had not had the recent rains.

Barrows says, “This is an area that is known to be inhabited by transients. The Sonora Police Department did move in there at our request a couple of weeks ago. They evicted or evacuated some of the people out of that area or asked them to move out.”

The Sonora Police Department is investigating the blazes. Click here for a map of the fire sites.