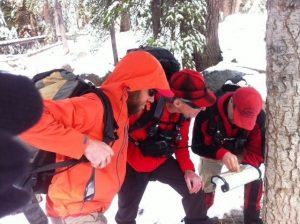 Sonora, CA – The Tuolumne County Search and Rescue Unit has been involved in assisting six people in five separate incidents over the past week.

On September 21 a 68 year old man from Sonora became separated from his hunting partners while hunting near Forest Road 6NO6. The lost hunter was able to make cell phone contact with his wife and he was advised and sought refuge in a hollow tree and was able to start a warming fire. He was located the next morning by members of the search and rescue unit.

On September 23 a 68 year old man from Stockton became separated from his friends while hiking in the Pinecrest Peak area. He was located with a leg injury and the Search and Rescue unit members stayed with him until the morning. The man was then flown out by CHP Helicopter.

On September 27 two hunters, ages 30 and 34, from Garden Grove, became lost in the double dome area. Search and Rescue units started a search with the aid of a CHP Helicopter. The CHP helicopter located smoke from the Eagle Meadow Road area and it was the lost hunters. Both were flown out by CHP Helicopter. The incident report does not have further information on the condition of the two men.

On September 28 a 56 year old man from Menlo Park hurt his leg and could no longer walk. He was with other members of his hiking party in the Toe Jam Lake/Salt Lick Meadows of the Emigrant Wilderness. Search and Rescue started a rescue operation and the man was located and flown out by CHP Helicopter.

On September 28 a 30 year old hunter from Riverbank became separated from his hunting party above Pinecrest, below Pinecrest Peak. Search and Rescue initiated a search but the man wandered into a camp occupied by other hunters. The other hunters were walking the subject out when they were met by the Search and Rescue Search Team. They brought the man out the rest of the way and reunited him with his friends.

SAR Coordinator Deputy Lyons advises that recreationists should not go alone while hiking, hunting, fishing etc. Most of the missions involve subjects traveling alone unaccompanied by other hikers, or hunters. He suggests individuals always leave a travel plan including route and destination with a responsible party not involved with the activity. He also advises preparation for inclement weather as well as extra supplies to last longer than the anticipated activity.

Anyone who is interested in becoming a Search and Rescue Unit Volunteer Member can go to Tuolumnesar.com or contact Deputy Lyons at 209-533-5815