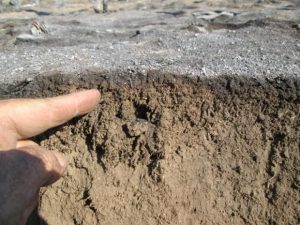 Tuolumne, CA — The Burned Area Emergency Repair (BAER) Implementation team has received just over 4.6 million in funding to begin emergency stabilization of the Rim Fire area. The BAER team and equipment will be staging out of the Rim Fire incident command camp in Tuolumne (city). BAER Spokesperson Don Ferguson says they will be there, “for at least a couple more months.”

Based on average rainfall from years past the team is preparing contracts for additional road equipment. Ferguson says, “If we get a real storm there is nothing we can do to keep all that dirt there.” He added, “It would be great if it rained a half inch at a time, but you never know how much to expect.” They will first remove hazard trees along 191 miles of priority roads (57% completed so far) and install route markers. Hazard tree removal within recreation sites is underway, surveying of cultural and historical sites is also being done by archaeologists.

According to Ferguson over 300 miles of trails and roads are to be managed. He they are working quickly to get the bulk of the work done before it rains. Ferguson noted that the dirt roads become very slippery after small amount of rain but they plan to maintain a safety record with few injuries.

Ferguson says, “There is a positive local impact, we will hire local contractors and laborers whenever possible because they know the area and can get [to the Rim Fire damage] quickly.” He asked for continued understanding from locals as there will be some out of area people that have to learn to navigate unfamiliar roads.

Ferguson says, “A lot of equipment will be coming in for road work, to put in new and enlarged drainage ditches and culverts. All of that will help drain water under roads.” The BAER team will be stabalizing the landscape and streams with mulch made of straw and shredded wood fiber on the burned ground. The team will also be placing rocks into streams, riverbanks, and hillsides, in a procedure known as armoring. The main goal is to enlarge ditches and culverts to handle more debris and restore drainage. Ferguson noted that many tree tops that were not burned in the fire are now loosing their needles. The pine needles are creating a layer inches deep that, according to Ferguson, “will be much better at protecting the ground than any mulching we could do.”

Posted signs of the closure areas are to remind the public that until things are tested by the winter rains and into the spring the area is very dangerous. Ferguson says they are working to prevent mud and landslides and roads from washing out. He says similar burned areas have taken up to two years to evaluate and stabilize. Their main priority continues to be preventing roads from being washed out and creating dangerous situations down stream.