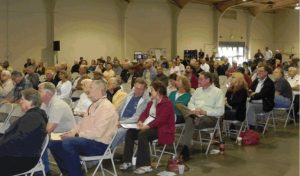 Most of the presentations were tied to the devastating fire and the current and future restoration efforts. Congressman Tom McClintock was initially scheduled to be the keynote speaker but had to miss the event due to the ongoing legislative session in Washington, DC. His District Director Rocky Deal spoke about emergency legislation to expedite the salvage of timber on the Forest land. He also said it was important for the local community to be a major voice in the restoration efforts.

Sierra Pacific Industries Vice President Dan Tomascheski spoke about the 16,000 acres of SPI land that was impacted by the Rim Fire. He described 9,000 acres as being completely “toasted.” He said the first priority in their restoration effort is erosion control, the second is the quick harvest of burnt timber, and the third is the long term reforestation. TuCare member Mike Albrecht, who served as the Summit’s emcee, gave special praise to SPI and their efforts to construct 13 miles of fire line during the early stages of the Rim Fire when resources were limited.

Pacific Southwest Division Deputy Regional Forest Service Supervisor Barnie Gyant gave an update on the reforestation efforts, and said the BAER Team funding request has been signed by the Regional Supervisor and is on its way to Washington, DC. He said it could receive final approval late today or early next week. The financial request has not formally been made public, but he said it is in the ballpark of $4.3 million. The money would help efforts to stabilize the soil and make road and infrastructure repairs before the heavy rains hit.

CAL Fire Deputy Director of Resources Bill Snyder praised the Highway 108 Fire Safe Council’s efforts in creating fire breaks prior to the Rim Fire. He said it was instrumental in saving areas like Groveland and Pine Mountain Lake. He also spoke about why he feels fewer restrictions on forested land would be beneficial.