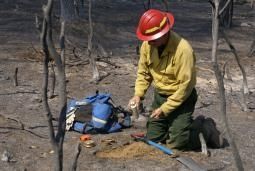 Sonora, CA – The BAER Team has delivered its final report and funding needs on the Rim Fire to the Feds for approval. The Forest Service hydrologists and soils scientists also completed their modeling for predicted post-fire water run-off and erosion levels. The BAER team identified critical values-at-risk and finalized their recommended emergency stabilization actions and treatments.


BAER Spokesperson Don Ferguson says, “Many miles of roads and trails where ditches will fill up with eroding soil which could block coverts sending water over the road could be costly. If you wash out a road you can take huge losses. We are primarily restoring water flow function in the fire area.”

That information along their data, analysis, and findings were included in the assessment report given to the Forest Supervisor today, who will then forward it to the Forest Service Regional Office and Washington Office for review, approval and funding. BAER estimates it will receive funding for the emergency stabilization actions and treatments by October 2. The full report with a total dollar amount will be released to the public once federal approval is given. BAER emergency stabilization treatments funded from an initial Rim BAER request began this past weekend and fire suppression repair by the current Rim incident management team is ongoing.

“Everybody knows winter is coming and the more we get ahead of a heavy rain the better. This weekend’s rain didn’t hurt us. We had minimal erosion and good percolation of the water into the soil. There was not a whole lot of runoff, but we’ve got to get our roads and drainages safe before a real heavy rain hits us,” says Ferguson.

Ferguson says one thing the money won’t be used on is reforestation. Click here for an earlier story on the first soil assessment report.