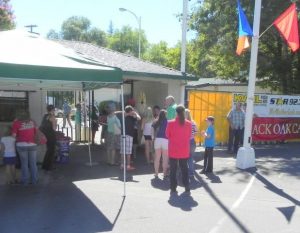 Don Bean, Manager Mother Lode Fairgrounds, says “The big change that has happened is that fairs used to be funded by the state… but they haven’t been for the past couple of years. Just like any other business we now have to figure out a way to take this 38 acres, rent it out more often, to develop some of our resources, to help make more money so hopefully its rented more often.”

The CFSA will help conduct at least two meetings where the community is asked to give their input. The Strategic Planning Process will develop a Master Plan for sustained development and operation of the Mother Lode Fairgrounds and the Mother Lode Fair. Bean mentioned funding could come from grants, non profits, or from producing its own events. He noted that the Mother Lode Fair was profitable this year for the first time in many years.

The first of several community meetings is scheduled for this Saturday morning, September 28th from 8:00AM to 11:30AM in the Creekside Building at the Mother Lode Fairgrounds. The Fair Board of Directors will participate in the planning process and has opened up the planning task force to all residents that wish to participate regularly or provide input for consideration.

For those that would like to participate in the full planning process from September through the end of the year, applications are available at the Mother Lode Fairgrounds. According to Bean, the application is simple, asking for basic background information and to agree to participate for a minimum of 90 days.

Bean says everyone is invited to attend meetings, submit ideas during public comment periods and receive regular updates and reports.