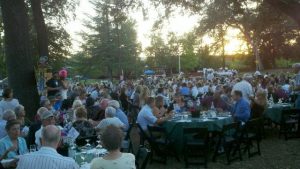 Sonora, CA — The Rim Fire has already cancelled some Mother Lode events and caused others to be postponed; now today’s rain is also getting in on the action. The Humane Society of Tuolumne County (HSOTC) has canceled this afternoons Red, White, Brew, and Chili, Too Americana-style Family BBQ. However, the meat will go on the barbie tomorrow. The group has rescheduled the event for this Sunday, September 22 from 3:30pm to 6:30pm at the Hurst Ranch – Picnic Area off Highway 108 in Jamestown. There will be plenty of BBQ, train rides for all family members, entertainment by the Sierra Mountain Band and a live auction.


The Rim Fire caused some other events to be canceled or postponed as well. One that has been canceled is the popular Strawberry Musical Festival. Officials tried to postpone it to another weekend, but were not able to work it out.

Also, Film Fest Twain Harte was rescheduled to the second weekend in October. The event kicks off Friday, October 11 and culminating with the presentation of Awards on Sunday morning, October 13. Special Celebrity Guests include Jon Lindstrom (As the World Turns, Port Charles, General Hospital, Must Love Dogs) bringing his new film, How They Got Away with It, and Sally Kirkland (Anna), who, with Hollywood Casting Director Billy DaMota, will be presenting Posey, a short film endorsed by the Alzheimer’s Association. This film will open the Film Fest on Friday night at 7:30 pm. Films will be shown Friday night and all day Saturday with the final films screening at 10 pm.