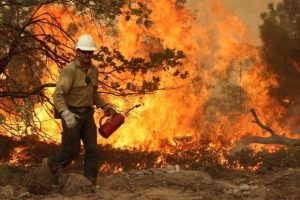 
Residents along the Highway 108 corridor will continue to see smoke plumes in the air as firefighters continue back burning within the containment lines.

Incident Command Spokesperson Richard Hadley explains, “A lot of the unburned islands that were inside the containment lines, many of those have been consumed. They can still expect to see smoke coming out of there as the larger columns or plumes of smoke lift off in the afternoon.”

Hadley says the biggest challenge right now is the winds lining up with the canyons near Tioga Road. He says that is causing the fire to be very active, but he says the lines are holding so far.

Firefighters will face hot and extremely dry conditions today, coupled with shifting winds and low fuel moistures. Large pockets of fuel within the fire perimeter will continue to burn, creating potential for spot fires outside the containment lines. The variable winds will test lines on many areas of the fire.

Today’s top priorities are holding the lines on the northern and southeastern flanks and beginning inventory of repairs required as a result of suppression activities. Firefighters will also continue to patrol, mop up and monitor all contained areas of the fire and developed areas near the fire area. Last night, four hotshot crews backfired along almost a mile of hand line toward Hardin Lake.

Highway 120 between Groveland and Yosemite is open. Caltrans reports it fixed about 1,000 burnt guard rails and brought down 1,800 scorched trees along the roadway. Fire Officials ask motorists along the highway to use caution and avoid stopping when driving through the fire area. Also, the Air Quality Alert for Tuolumne County has been extended to Monday at Noon.

Fire Officials report Highway 120/Tioga Road remains closed from Crane Flat to one half mile east of White Wolf. Park visitors can access Tuolumne Meadows from SR-395 via the park entrance at Tioga Pass. Cherry Lake Road is closed at State Route 120. Evergreen Road and Old Yosemite Road are also closed. There are no mandatory or advisory evacuations in Mariposa or Tuolumne Counties, but some secondary roads remain closed to non-residents within the fire area.

A reminder, the Incident Command is holding a community meeting in Twain Harte to update the public on the Rim Fire fight. The meeting starts at 6pm at the Twain Harte Park Amphitheater.

The two speakers will be Incident Commander Jerry McGowan and Forest Supervisor Susan Skalski. The public is encouraged to attend and ask any questions they have regarding the blaze.