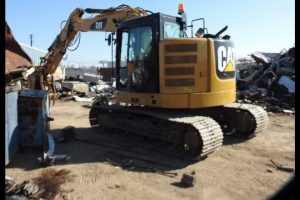 Sonora, CA — Over $710,000 worth of stolen equipment, including a Caltrans Caterpillar excavator taken from Coulterville, were recovered at a Merced chop shop.

The picture in the image box is that stolen Cat earth moving equipment. It was reported taken in early February from a Caltrans downed tree and debris cleanup site on Highway 132 after the wicked winter storms hit the Mother Lode, as earlier reported here. Armed with a warrant to look for stolen vehicles, members of the Stanislaus County Auto Theft Task Force or StanCATT recently raided an automotive recycling business in the 300 block of Highway 59 in Merced.

Right away and in plain sight deputies spotted the stolen excavator, which was being used on the property. A further search of the property uncovered numerous theft items reported stolen out of Madera, Merced, Stanislaus, San Joaquin, and Tuolumne counties.

In all, investigators found ten confirmed stolen vehicles, trailers and heavy machinery, totaling about $717,000.  Slapped with a complaint is Carl Joseph Means, 36, of Merced, for ten counts of auto theft, possession of a stolen vehicle and three counts of operating/maintaining a chop shop.

Of note, Means has theft and tax evasion charges dating back to 2013. Most recently in January of 2018, Means entered guilty pleas to felony charges of grand theft and state income tax evasion. As the Plant Manager of a victim’s business, the Stanislaus District Attorney’s office charges that Means used his position to secretly transfer raw material from his employer’s facility to a different recycler in Atwater, bilking $455,000 from the business between August 2013 and May 2016. In that case, he was also accused of tax fraud for not declaring the money he made during those years.

Below is the list provided by the Stanislaus Sheriff’s office of the recovered stolen property located at the chop shop: