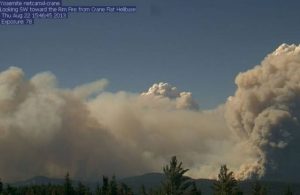 Sonora, CA – There is an organized response to the needs of the Rim Fire firefighters using an established Incident Command System. The system was developed by fire responders and is now the mandated way to handle large incidents like the Rim Fire.

Assistant Information Officer, Veronica Garcia, says that the Incident Command Post at Drew Meadows is a mini city. The area has portable structures that are equipped with printers and computers and everything needed to provide a base for the fire operations. All of their needs are handled through the Incident Command System center at the Stanislaus National Forest Building off of Greenely Road.

Supervisor of the Expanded Rim Fire response, Dick Reynolds, was called in to manage Rim Fire supply requests. Four California response teams were already allocated so most of the Rim Fire response team organizers are from out of the area. The teams are in charge of getting resources from paper, to personnel, to portable toilets, where they are needed.

Supervisor Reynolds says two 737 airplanes will pick up hand crews from around the United States and fly them into Sacramento airport. Those extra crews will be on hand by Saturday to fight the blaze. The U.S. Forest Service is concerned with fire management while CalFire is focused on fire suppression. Both teams are working together since the fire began to threaten homes.

Computers are being set up for the extra staff that is setting up to manage the ongoing fire effort. The staff will manage the extra resources as the Rim Fire category has updated to a Type I category response team. The South Central Sierra Type II team is transitioning off of the Rim Fire as the Type I team comes in with further help. The team on the Rim fire so far is a diverse inter-agency team with experience in all-hazard/all-risk incidents that travels throughout the United States during emergencies. Their website is here.

Supervisor Reynolds says their team contacts local resources for food, water and anything else that is requested and approved for use to fight the fire. When local resources have been used they send their requests to a Statewide Incident team, if they do not have the resources it escalates to a National level request.

The incident center is generally staffed and operates until midnight, crews work on 12 hour shifts around the clock with fire status briefings at 6AM and 6PM.