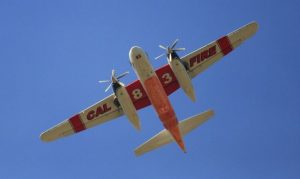 Columbia, CA — The Rim Fire is being attacked on many fronts by over 1,356 personnel. There are several different types of aircraft fighting the fire flying over the Sonora area from Columbia Airport to the Rim fire near Groveland. Pine Mountain Lake Airport has two mobile fire retardant tanks for refueling.

Information from the Forest Service says fixed wing aircraft are, “pertinent to the success of suppression operations.” They also say, “The use of Maffs C-130s and the V-LAT DC-10 has greatly improved suppression efforts.”

C-130 can carry 3,000 gallons operated with a pilot, co-pilot and Flight Engineer. Retardant or water is dropped out of the tank in under five seconds through two tubes at the rear of the plane or through one tube out of the side in the newer models. The retardant dropped can cover an area of one quarter mile long and 60 feet wide to act as a fire barrier.

The DC 10 can carry up to 12,000 gallons. It is utilized in extended attack fires as it is limited in time effectiveness for reloading fire retardant as well as its need to reload and refuel at an equipped aerial firefighting base (currently Victorville and McClellan are the only bases in California serviceable for this large an aircraft). One drop for the DC-10 is equivalent to 12 drops of an S2-T or a line of retardant that is 300 feet wide by one mile in length. According to assistant information officer Veronica Garcia the retardant drops saved Camp Tawaonga and the incident command post at Drew Meadows both of which the fire line has moved past, over and around. The homes lost is still at two.

The Forest Service also says, “The use of Military Rotary wing aircraft continues today.” The Kaman “K-Max” is a heavy lift helicopter with a 700 gallon capacity and one pilot on board.

Sikorsky S-70 “Firehawk” can carry 1,000 gallons. The Firehawk is the civilian version of the U.S. Army’s popular Blackhawk or UH-60 and the U.S. Navy’s Seahawk. The UH-60 was originally designed for the U.S. Army in the 1970s as a light transport helicopter used for air assault and as a military medievac helicopter. The aircraft is a four bladed, twin engine helicopter. For water or retardant delivery, the S-70 can have a large tank mounted on the bottom or can carry a bucket.

Sikorsky S-64 can carry 2,650 gallons. The S-64 “Skycrane” was originally designed for the military and had interchangeable pods that fit underneath for troop transport and cargo movement. The S-64 has six rotor blades and two turbine powered jet engines, which allows it to carry heavy loads. In 1992 Erickson Air Crane purchased the manufacturing rights to the S-64 and modified it to carry a 2,650 gallon tank. The tank can be filled by a draft hose in less than one minute, while the helicopter is hovering. The S-64 requires a pilot and co-pilot to fly it and typically has a 6 to 8 person support crew.