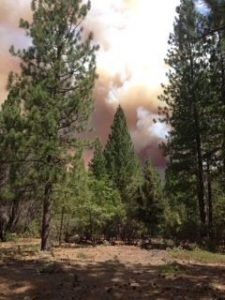 Groveland, CA — The top of the line is here to help battle the Rim Fire according to the Forest Spokesperson Jerry Snyder. Members of the Type One Incident Fire Team have arrived.

“The best of the best are on these type teams. Usually the complexity of the fires are at such a high degree that it takes lots of skill and lots of resources to extinguish those fires,” says Snyder. The team is scheduled to shadow the current teams on Friday and then take over command of the fire on Saturday.

The fire is sitting at just over 16,000 acres and 5% contained. Fire Officials report today the flames spread in all areas except the southwest region near Hwy 120. The Fire continues to spot over Ferretti Road as the fire progressed west towards the community of Pine Mountain Lake. Also, flames burned over Cherry Lake Road and past the Incident Command Post this afternoon. Aircraft dumped retardant over Camp Tawonga forcing the fire to burn around the camp. Fire Officials say the use of Maffs C-130s and the V-LAT DC-10 has greatly improved suppression efforts along with Military Rotary wing aircraft.

The number of Firefighters on scene has grown to 1080. The cost to battle the blaze has grown to $2.8 Million. There are still some 2,500 structures threatened. Resources include: Hand crews 15, Engines 30, Helicopters 7, Water Tenders 17, and Dozers 19.

Snyder warns, “I think the community had best be on alert for the entire time this fire is burning because it is very erratic. The fact that we have the best possible resources coming in now bodes well for us getting this fire out before it does serious damage to homes property and natural resources.”

Photos can be emailed to news@clarkebroadcasting.com.