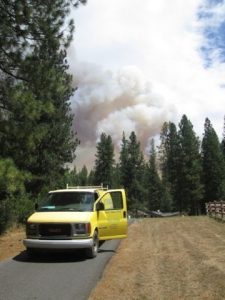 Sonora, CA — The Tuolumne County Supervisors are holding an emergency meeting this afternoon to ask for additional state help from Governor Jerry Brown to battle the Rim Fire.

The Supervisors will ask the Governor to declare a statewide emergency due to the fire that has exploded in the Stanislaus National Forest. The Rim Fire jumped the containment line around noon, prompting the Tuolumne County Sheriff’s Office to recommend that the 3,000-plus homes in the Pine Mountain Lake Subdivision be evacuated. As a precaution, PG&E has cut off power in certain areas of Pine Mountain Lake.

Other areas under the evacuation notice include Camp Mather, the Berkeley Family Camp, Hardin Flat, Ferretti Road, Clements Road, Camp Tawonga, Buck Meadows, San Jose Family Camp, Rainbow Pool, Yosemite Inn, Early Intake, Evergreen Lodge, Packard Canyon and the Spinning Wheel Forest Service Facility. Officials have put in place a reverse 911 system to notify residents that are under an evacuation advisory. The 911 dispatchers are getting flooded with calls from people in the region. The county has set up a hotline for people that want to call in with questions, at 533-5174.

We will keep you updated on this breaking news as more information becomes available. A special thanks to our community news partners for sending in photos from the scene. They can be sent to news@clarkebroadcasting.com.