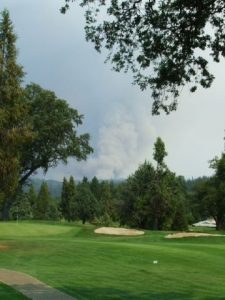 
The Rim Fire in the Stanislaus National Forest jumped over the Tuolumne River and is along Highway 120. The CHP reports that Highway 120 is still closed from Ferretti Road to Cherry Lake Road.

This afternoon Mariposa County officials contacted Tioga High School about opening an evacuation center at the school, and the Forest Service announced that the site would be used for that purpose. Tracie Riggs of the Tuolumne County Office of Emergency Services says the location is being reassessed, and a decision will likely be made within the next hour about where evacuees should go for the night. Advisory evacuations are in place for the Buck Meadows area in Mariposa County, and in Tuolumne County at the San Jose Family Camp, Rainbow Pool, Yosemite Inn, and the Spinning Wheel Forest Service Facility.

We’ll pass along more details when they are available. There is not a new size estimate at this time. Before jumping over the Tuolumne River, the fire was 800 acres.

A special thanks to our community news partners Suzanne Ctibor, Mike McEvoy, Jerry Day and Doug Schmiett for sending in photos of the fire.