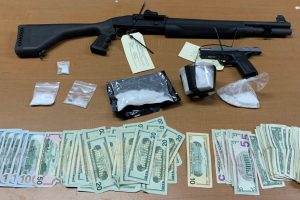 A Subaru crossing over double yellow lines and narrowly missing a pedestrian while traveling southbound on South Main Street/Highway 49 In Angels Camp early Thursday morning resulted in calls to police dispatch. Officers immediately began looking for the vehicle and one spotted it in a parking lot of a business in the 2800 block of Hwy 49 in Angels Camp.

Behind the wheel was 38-year-old James St Louis. Officers discovered one pound of methamphetamine, $1700 in cash, and two firearms that he had concealed on his person and hidden in the vehicle.

St Louis was arrested without incident on several drug-related charges including possession of a controlled substance, drug sales and transportation. He also faces charges of a felon having firearms while under the influence of an illegal drug and a vehicle driver carrying concealed firearms.