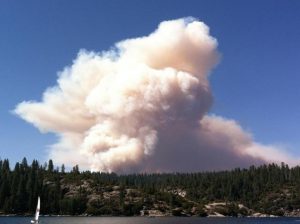 Forest Spokesperson Jerry Snyder says smoke isn’t the only problem. “Last night a tree that had burned out in the center fell and severely damaged one of the engines. Luckily, no one was injured as crews were laying out fire hoses quite a ways away when it came down. Throughout the night, fire fighters reported hearing trees falling as gravity is taking its toll on the very steep terrain,” says Snyder.

There have been no evacuations. Highway 108 is open. However,  it could be closed intermittently due to the heavy smoke conditions or crews possible back burning near the roadway. Snyder says they are counting on recent fire prevention work done along Highway 108 to help them battle the blaze and stop the flames from spreading. Also, he says smoke will continue to be a problem as the fire spreads into the higher elevations and more trees burn.