Pedestrian Vs Truck In Downtown Sonora 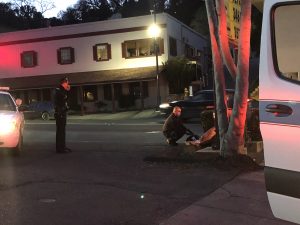 Pedestrian hit by pickup truck on South Washington in Sonora

Sonora, CA – Sonora Police are investigating how a truck struck a pedestrian on South Washington Street during the evening commute.

After a hard day of work, the victim, Casey Boatright, a construction worker from Brentwood, California, tells Clarke Broadcasting he is staying at the Heritage Inn and decided to head to a nearby gas station for some food. He says it happened so fast, one minute he was crossing the street and was about to the middle of the crosswalk when, “Wham, I was hit.”

Traffic was backed up in both directions on Washington Street as it was just after 6 p.m. Boatright claims the female pickup driver made a left-hand turn from Gold Street right into him. He recounts, “The truck hit me, and I went down and then one of its front tires rolled right over the calf of my left leg.”

Luckily, Boatright says he only got some scrapes on his leg. He was able to stand and walk. After being checked out by emergency responders, he refused to be taken by ambulance to a nearby hospital for any additional treatment. Police officers on the scene would not comment on the collision, except to say that an investigation is ongoing.

Still visibly shaken from the experience, Boatright added, “It happened so fast, you just never know, that was close.”