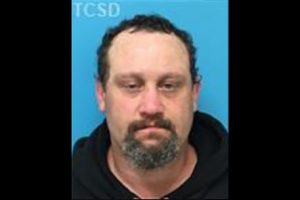 Jamestown, CA – An argument led to a Sonora man pulling out a BB gun and shooting a woman.

In the early morning hours on Monday, the CHP requested Tuolumne Sheriff’s Deputies to back them up on a domestic violence call in the 10800 block of Seco Street in Jamestown. During questioning, deputies learned that the female victim and 41-year-old Matteson Gordon had been arguing “over personal issues.” Investigators say it switch from verbal to physical assault with Gordon allegedly shooting her in the torso with a pistol-style BB gun.

Gordon was also found to have two grams of methamphetamine and drug paraphernalia on him after being search by the CHP. In addition, a record check revealed he had both local and outside agency warrants out for his arrest. One involved forgery of a driver’s license and several others hand to do with stolen credit cards and another was for burglary. Gordon was arrested without incident and placed on a $40,000 bond.