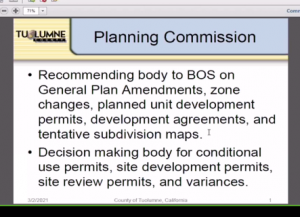 The commission makes decisions and recommendations regarding development and land-use proposals.

The appointment terms for the seats representing supervisorial districts one, four and five, along with an at-large seat, all expired last month. The seats have been held by Ryan Relei, Mark Banks, Charlotte Frazier and Dick Pland.

New District One Supervisor David Goldemberg nominated Jerry Morrow for his district’s seat, Supervisor Kathleen Haff recommended Catherine Santa Maria for District Four, and Supervisor Jaron Brandon proposed Linda Emerson for District Five. There was consensus among the board to allow the individual supervisors to pick the appointments for their districts.

For the at-large seat, Supervisor Ryan Campbell nominated Kara Bechtle, who has a community organizing and consulting background. Supervisor Anaiah Kirk said he preferred Mark Banks for the seat because of his knowledge of the building industry. Supervisor Jaron Brandon nominated Joel Franco who he says has a background in contracting, being a realtor and creating a strong communications/social media presence.

Supervisor Kathlen Haff asked that the board be given more time to talk with the applicants, and Supervisor Campbell took issue with idea, and argued that now is the time to debate and vote to fill the seats. Supervisor Brandon then stated that some of the applications arrived much later than others, and supported Haff’s idea.

Asked for his input, Supervisor Goldemberg said he was willing to vote now, and Supervisor Kirk also indicated a willingness to move forward now. Banks and Franco both then failed to receive support from a majority of the board. Bechtle was the final motion, made by Campbell and seconded by Goldemberg. Haff decided then to also vote in favor, and Brandon and Kirk were opposed.

The terms for the four new members, Morrow, Santa Maria, Emerson and Bechtle, are four years.