Burglars Caught In The Act By Watchful Sonora Neighbor 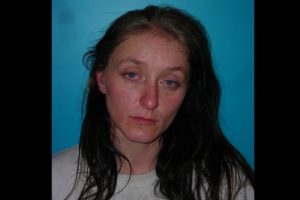 Sonora, CA – A neighbor foiled a burglary attempt when he spotted two people attempting to get into the back of a downtown Sonora home.

The call came into dispatch around 5 p.m. last Wednesday, Feb. 17, reporting a residential burglary in the 200 block of West Jackson Street. SPD spokesperson Thomas Brickley recounts how a neighbor approached the alleged thieves, “A neighbor in the area noticed that somebody was inside residents and went over and tried to confront them, but the two subjects that were in the house fled before they could call 911.”

One of the two suspects, 28-year- old Falina Grell of Sonora, did not get far and was found hiding behind a business in the area. She was taken into custody without incident.

Grell’s accomplice, a man, that police have already identified is still wanted. His name is not being released at this time, explains Brickley because it is an active investigation. He adds that no further information about the second subject is being released.

While SPD is appreciative of being alerted to the crime, Brickley recommends residents not have direct contact with those committing crimes for safety reasons, instead call police immediately.