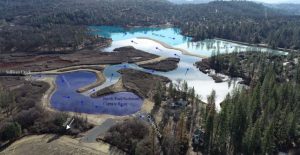 Sonora, CA – Tuolumne Utilities District’s (TUD) Phoenix Lake Preservation and Restoration project is nearing completion, but there is one snag.

Access to the eastern portion of the lake pictured in the image box was hampered by wet conditions and soil types that made dewatering and conventional excavation impractical. TUD spokesperson Lisa Westbrook explains, “We did try to move equipment in there and they [crews] just could not do the dredging that they needed to. It’s a very wet base dredging operation that would need to be employed, which would mean more funding to get that part of the lake completed.”

Unfortunately, that cost exceeds the district’s remaining budget, so funding will have to be found elsewhere. Westbrook says the district is already investigating funding sources and construction methods that can be used to improve the areas in the future.

As for the rest of the reservoir, already over 160,000 cubic yards of sediment has been removed, equalling about 100 feet high if placed on a football field, according to Westbrook. That work has deepened many areas of the lake’s bottom. Also, new channels were constructed to give the lake a new form and enhanced functions to reduce the growth of prolific invasive aquatic vegetation while improving water quality, cold water habitat for fish, and for use as a domestic water supply, relays Westbrook. She says, “Most importantly, the sediment capture basin on the north side of the lake is now complete and operational. It will help to prevent the building up of new sediment, which is critical to the on-going preservation of the lake.”

The final area that still needs to have sediment removed under the current project is Chicken Creek, which is a tributary on the north-western side of the lake. Westbrook details, “Over the years it has become filled with sediment and lots of brush. So, we’re going to be clearing out about 2,000 cubic yards of sediment and that will be happening hopefully sometime this summer.”

A separate project to rehabilitate the dam and spillway to improve safety and reliability will remove an additional 400-500 cubic yards of sediment near the concrete spillway on the far western side of the lake. Westbrook adds that the district is also planning vegetation removal along the southern and eastern shorelines to improve water quality and aesthetics. She notes that while these projects are under construction, residents can expect lower than normal water levels in the lake, like what was experienced last summer.

As reported here in May of last year, the lake can store up to 850 acre-feet of water, but sediment that has accumulated over the years has reduced it to around 600 acre-feet. The $4.1 million improvement project should restore the lake’s capacity to over 700 acre-feet. The target date for completion is October of this year.