Garage And Vehicle Damaged In Fire Hampered By Steep Driveway 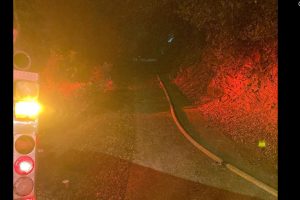 Sonora, CA – A steep driveway forced firefighters to use a workaround tool they keep on hand for just this type of situation.

The call came into dispatch around 4:30 a.m. reporting a structure fire in the 300 block of Alpine Drive near Calaveras and Shaws Flat roads. The picture in the image box shows the climb to the residence. Sonora Fire Dept. Chief Aimee New details how a hydrant is hooked up to the engine and a larger hose must be used to get water to the blaze.

“It’s like extending the hydrant off of the engine up to the top of the driveway,” explains New. We’ll hook up our large diameter hose, which is a five-inch hose. It provides the most amount of gallons per minute to extinguish the fire. From there, we hook in smaller hoses that the firefighters can manage easier.” She also remarked that with the larger hose there is no loss of water pressure due to the incline.

Luckily, the man and woman inside the home were alerted to the fire by a smoke detector and escaped unharmed. The garage and a BMW Sedan were damaged, mostly by smoke, according to Chief New. She added that they are still trying to determine what ignited the blaze but noted that it was not suspicious. Tuolumne County Fire Department assisted in fighting the fire.