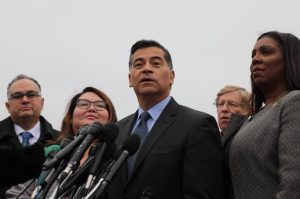 Xavier Becerra is President Joe Biden’s pick to become Heath and Human Services Secretary and lead many of the elements of the COVID-19 response.  The Associated Press reports that Republicans are portraying Becerra as unfit and radical, and Democrats counter that the GOP is playing politics.

Today Becerra will go before the Senate Health Committee and tomorrow the Finance Committee. Yesterday Republican Senators Tom Cotton and John Kennedy sent a letter to President Biden arguing that Becerra is “unfit for any position of public trust.” In addition, Senate Minority Leader Mitch McConnell refers to him as “famously partisan.”

Becerra led California’s resistance to several policies enacted during the Trump Administration. He was appointed by former Governor Jerry Brown to serve as AG in 2017 shortly after President Trump took office.

Governor Gavin Newsom has been waiting for Becerra’s confirmation hearings to conclude before announcing a potential Attorney General successor.