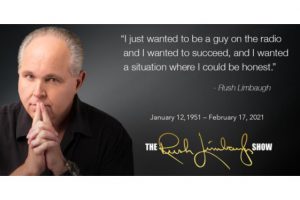 Sonora, CA – The Rush Limbaugh show will continue to honor the legacy of the radio icon, and the lineup of guest hosts has been announced for the week.

His widow Kathryn appeared at the beginning of today’s program. She has been taking calls from listeners looking to share their condolences and stories with Rush’s immediate family. Rush Limbaugh passed away on February 17 at the age of 70. In a written statement, the syndicator, Premiere Networks, said the show will continue with the “Best of Rush,” before announcing any next step.  The shows will air on AM 1450 and FM 102.7 KVML in his regular time slot from 9 AM to noon.

Mark Steyn will manage today’s program. Premiere Networks says Steyn will guide conversations through “Rush’s frequent mention of Kathryn in connection with all they did together with the involvement of the listeners.”Kathryn was Limbaugh’s fourth wife; the couple was married for more than 10 years.

The majority of each program this week will feature audio from Rush’s 32 years of programming, guided by the trusted voices that Rush’s audience has known for many years.  On Tuesday the program will feature Brett Winterble, on Wednesday, February 24th Todd Herman, Ken Matthews will be on Thursday and Todd Herman will wrap up the week on Friday. The shows will entail Limbaugh’s producers pulling relevant segments for each day’s news cycle, featuring the best of Rush for the full three hours of the program.

Regionally, Limbaugh began his ‘talk’ radio career in the mid-1980s in Sacramento.  Several years later, the national EIB program began in New York City on August 1st, 1988. The show has been the #1 nationally syndicated show since the early 1990s.

Update: The Rush Limbaugh Show, which held the weekday timeslot from 9 AM to Noon on KVML for over three decades, is coming to an official end on Friday, June 18th. Beginning Monday, June 21, a new show to the local airwaves will debut Markley, Van Camp and Robbins on KVML 102.7 FM and AM 1450 details here.