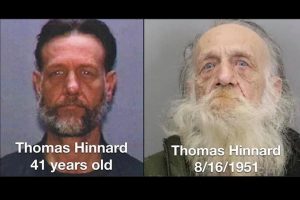 Sonora, CA – A Sonora man is behind bars after misplaced evidence from a Bay Area murder scene was found pointing to him as the alleged murderer.

Tuolumne County Sheriff’s Deputies assisted Sunnyvale Police Detectives in arresting 69-year-old Thomas Hinnard on Friday, Feb.12th in Sonora. The arrest stems from the early morning July 19, 1979 slaying of 45-year-old Keith Judd, the owner of the Lakewood Lounge in Sunnyvale, who was found at the bar brutally beaten and then left for dead after being robbed. An employee found Judd around 5:30 a.m. on the floor with bloody footprints around him. He was rushed to the hospital, but he did not survive.

The mislaid evidence was fingerprints found in the specific area where the homicide occurred in the lounge, which Sunnyvale Department of Public Safety Detective Matt Hutchison discovered recently. He had been working on the cold case since reopening it in 2018. The prints were sent to the Santa Clara County Sheriff’s Office Identification Unit for examination and were identified as Hinnard’s. A targeted investigation of Hinnard began, which revealed he lived in Sunnyvale at the time of the homicide and even worked at a business located in the same shopping center as the lounge. It was also determined that Hinnard frequented the bar.

After re-interviewing dozens of people, including Hinnard, who police say lied several times and made numerous incriminating statements. The Santa Clara County D.A. determined there was sufficient probable cause and gave the green light to arrest Hinnard for Judd’s murder. Hinnard is currently in custody at the Santa Clara County main jail on no-bail status.

Anyone with additional information regarding this case is asked to contact detective Hutchison at 408-730-7100. A video recap of the crime is with his photo.