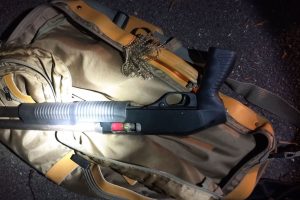 Sonora, CA – A Sonora man caught sleeping in his car with visible drug paraphernalia and a gun on the passenger’s seat was surprised to be awoken by police.

Noticing a suspicious 1998 Toyota sedan without license plates on Saturday around 11:30 p.m. parked on Forest Road, just north of Sylvan Lane and off Stockton Street in Sonora, an officer decided to investigate. He found the driver, 42-year-old Brandon Hamilton Blas, sleeping and holding a suspected drug pipe in his hand. On the passenger’s seat was a handgun.

After waking Blas, the officer began questioning him. He gave a fake name to the officer who later discovering his California ID Card. A record check showed Blas was a convicted felon with seven outstanding felony and misdemeanor warrants including possession of firearm charges, drug charges, spousal battery, vehicle theft, arson, and drug-related offenses.

A search of the car revealed a concealed, loaded shotgun that had been reported stolen on Feb. 5th. It also turned up methamphetamine, no amount was given, and additional drug paraphernalia. The firearm found on the passenger’s seat was determined to be a replica.

Blas was arrested for multiple charges, including being a convicted felon in possession of a firearm, carrying a loaded and concealed firearm within a vehicle, and providing false identification to a peace officer.